Skip to content
Kennedy Boats have been built by the “Kennedy Family” since 1964.
Email Us

Kennedy Boats have been built by the “Kennedy Family” since 1964. The company has evolved immensely throughout its 40-year history, but our reputation for quality marine products has never changed.

Bernie Kennedy is the founder of the manufacturing company and remained the CEO from 1964-2003. Prior to 1964, Bernie owned a manufacturing company in Glenwood , Minnesota that manufactured aluminum doors, windows and window awnings. In 1963 he had a request from a potential customer to custom build a cabin structure that would then be installed on a pair of 30-foot round steel pontoons. The project was completed and the customer was pleased with the makeshift houseboat.

Recognizing the market potential at the time for affordable, quality built pontoon houseboats, Bernie phased into the marine market with the company’s first production houseboats in 1964. At that time the floats were made of steel and were rolled into a round shape. There were problems with the performance of the craft, and in 1968 the floats were redesigned into an 8-sided OCTAGONAL shape made from aluminum instead of steel. This new design allowed the boats to hold their course much better in cross winds and alleviated the problems of “nose-diving”. A similar flat-bottomed OCTAGON design is still used today. The houseboats eventually evolved into a full line of models with lengths from 27 to 52 feet and widths from 8 to 12 feet.

In 1974, the first open deck PONTOON BOATS were added to the model line-up. A top of its class PADDLEBOAT was added in 1976. The pontoon boats and paddleboats utilized the same OCTAGONAL pontoon shape as the houseboats.

In 1974, custom TRAILERS for the houseboats and pontoon boats were designed and manufactured. The early trailers were much like the narrow scissor-lift trailers still offered by many companies today. After tipping over a houseboat on the highway one windy day, it was decided that the trailers needed to be redesigned. The trailer frames and axles were widened to double their original width for greater stability. Since the OCTAGONALLY shaped pontoons are much stronger on the bottoms, the new trailers were fitted with ROLLERS to support the load. GUIDE BUNKS were also added to guide the boat on to the trailer when loading, and help secure the load when on the highway. The end result was a very stable pontoon trailer that makes launching and loading easier than any other trailer offered on the market! 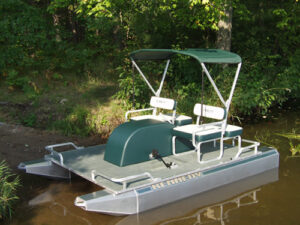 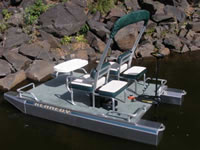 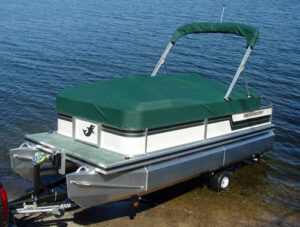 1978 saw the addition of the industry’s first NARROW BEAM “compact pontoon boat”. This model was originally 15 feet in length, 6 ½ feet wide and was packaged with a custom ROLLER trailer. It was recently increased to a length of 17 feet and larger floatation was also added.

Due to the increased demand and popularity of pontoon boats, the houseboat production was suspended in 1988.

Today, the trailers are built to our specifications by an outside manufacturer, but the design is much the same.

In 2003, manufacturing was transferred to Bernie’s son. The name of the corporation was changed from “Kennedy Houseboats, Inc” to “Kennedy Pontoons, Inc.”